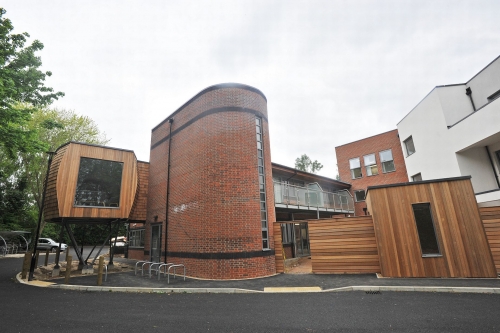 The Rutland Group was appointed by Woking and Sam Beare Hospice to manage the conversion of a derelict two-storey office block into a modern centre of excellence in palliative care. Work on the £11m state-of-the-art Day Care centre and Community Nursing Hub began in November 2015.

The dramatically improved hospice has a 20-bed in-patient facility, a Day Care unit designed to cater for daily outpatient visits, which include medical assessments and treatments, complementary therapies, physio and occupational therapies and wellness activities. Also based at the new building is a café, the hospice community team of Clinical Nurse Specialists and the teams managing administration, education, bereavement counselling and spiritual care.

Each patient room has been designed with its own en-suite facilities, accommodation for families and a balcony with views of the garden spaces. The Wellbeing Centre and the Garden café both open onto garden spaces designed by Charlotte Harris, who won Gold at RHS Chelsea Flower Show in 2017. The three garden spaces include The Retreat Garden, The Wildlife Garden and The Encircling Garden.

Woking and Sam Beare Hospice were handed the keys to the new build in March 2017 and, while the interiors were completed, started the transition processes over to the new Woking Hospice. The hospice was officially opened to the first in-patients in May 2017 and the offices for support staff were craned in and completed in August 2017.